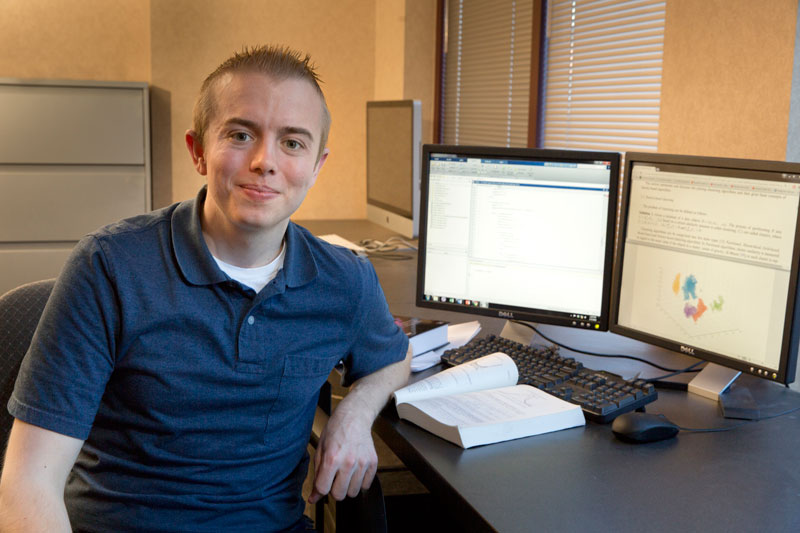 A plane ride, a magazine and a curious mind led Nathan Gaw to engineering.

Before a flight from Arizona to Chicago, Gaw picked up a National Geographic magazine that had a feature on neuroprosthetics. He read it once, then again and kept re-reading it until the plane landed.

“It was about using engineering to help translate really complicated signals from the brain, which I believe is the last frontier of the human body,” Gaw said. “I was fascinated by how you can use technology and engineering to translate the brain’s complex signals.”

When college acceptance letters started coming in, it wasn’t difficult for Gaw to choose Arizona State University. Though he was accepted into the University of Pennsylvania, an Ivy League school, among other good options, Gaw thought ASU provided the best opportunity for research as well as academics.

“I could have studied really hard at UPenn and never gotten my hands very wet with research, but ASU gives you more room to get involved in research and actually apply what you’re learning on top of rigorous academics,” Gaw said.

Upon choosing biomedical engineering as his undergraduate field of study, Gaw took advantage of the Ira A. Fulton Schools of Engineering professors’ willingness to include undergraduates in their research. He participated in research opportunities wherever he could, including in the Neural Control of Movement Laboratory, led by Marco Santello, a biomedical engineering professor and director of the School of Biological and Health Systems Engineering. 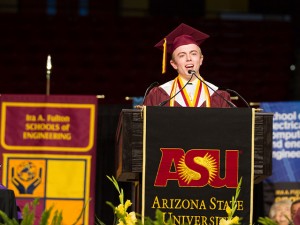 Nathan Gaw was the student speaker at the Fulton Schools’ convocation ceremony after completing his undergraduate degree in spring 2013. Photographer: Jessica Hochreiter/ASU

“Diagnostic data, such as results from an MRI, is very high dimensional, has high resolution and can be hard to interpret,” Gaw said. “I decided I wanted to go down the route of how to interpret this difficult data to better understand what parts of the brain are important for different brain diseases and help make better diagnostic decisions based on information from the image.”

When it came time to choose a doctoral industrial engineering program, Gaw said ASU’s high-impact research was one reason that made it a clear choice. The university’s collaboration with Mayo Clinic and Banner Health doctors and other industry partners provided excellent opportunities for his medical focus.

Gaw’s research involves developing theoretical methods to analyze data from a variety of applications and sources, and applying those methods by working directly with doctors to solve problems they have with their data. The theoretical and application approaches play off one another, for example, once Gaw helps a doctor solve a data problem, he thinks of how to use that solution to solve other problems.

So far in his research Gaw has been helping Mayo Clinic doctors use algorithms to analyze MRI and fMRI data to diagnose patients who have migraines, and using genetic and tissue contrast data to help diagnose tumors like glioblastoma brain tumors. Gaw has published academic papers with doctors based on his research, one of which received the 2015 Harold G. Wolff Award and another was submitted to Cephalalgia, a publication by the International Headache Society. 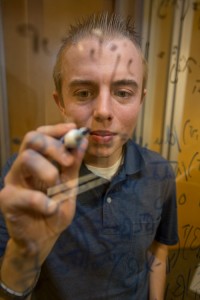 “Every professor you meet here is a superstar in their field,” Gaw said. “I have a class with a professor who has taught at other great universities like Georgia Institute of Technology and has more than 70,000 citations in his lifetime. He is known across the entire world. Another professor revolutionized transportation engineering and has highly impacted the way traffic is managed. The drive of the professors and the way they teach and do their research shows they love what they do and they’re very good at it.”

Gaw finds that along with how influential and smart they are, they’re also willing to help and connect with students.

“Professors are friendly and I feel comfortable stopping by their offices to pick their brains and ask questions about research, even if they’re not my advisor,” Gaw said.

Once Gaw finishes his dissertation in 2018 on methods of integrating different data sources to make a decision, he wants to become a trailblazing professor like those he’s learned from to pass on his knowledge at the intersection of medicine and engineering.

“I like to teach other people,” Gaw said. “As a professor you get to mentor one on one and teach others in a bigger setting. I get to learn from people I collaborate with and teach them the tricks from my domain. It’s fun to be a lifelong learner, and being a professor is one of the only jobs where you get paid to discover and explore.”

ASU is No.1 in the U.S. for innovation